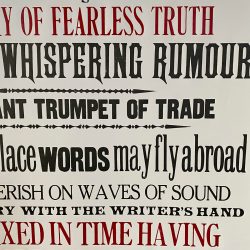 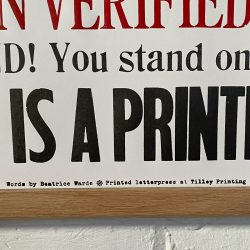 A letterpress poster printed by Martin Clark at Tilley Printing, Ledbury. With words by Beatrice Ward.

Oak poster hangers are purchased separately and can be found here.

Martin Clark, Master Printer and proprietor of Tilley printing, oversees the printing of each of our letterpress posters. Printed in small batches, these posters have all of the quirks and inherent characteristics typical of letterpress, making each poster a unique and beautiful piece of work.

For anyone who has visited the Tilley Printing premises you will know what a special and unique place it is with a history stretching long before Martin took over ownership. Originally established in 1875, Tilley printing was one of many businesses run by the Tilley family. Luke Tilley was the archetypal entrepreneur whose business sense and hard work resulted in the family dominating many areas of trade in the thriving market town of Ledbury.

For the first half of the twentieth century Miss Leonie Tilley was the proprietor and instigator of some considerable modernisation of the premises including the introduction of electric power to replace the steam generator and in the 1930’s Tilley’s collection of type was expanded to hold many avant garde type faces of the day. During the middle of the century the Heidleberg Platens were introduced transforming the production of Letterpress printed material.

Martin’s personal history and involvement with Tilley’s began with his five year apprenticeship at the tender age of 15, later going on to achieve his status as a Master Printer. During his career, which has included some time working at the Oxford University Press, Martin has maintained the traditional skills and craftsmanship of the Letterpress Printer.

Tilley Printing may possibly claim to be unique in the fact it remains a ‘Jobbing Letterpress Printers’ still housed in it’s original premises since 1875.

You can read more about Martin and Tilley Printing on our blog here.

What is a Limited Edition Artist Print?

An Artist or Original Print is hand-made and not a reproduction: the artwork is both created and printed by manual printmaking techniques eg. Wood engraving, etching, woodcut, linocut etc and as such is subject to minor or even quite significant and intentional variation. Limited Edition means that the print is restricted by convention to editions of no more than 200., because of the limitations of the block itself (wear and tear) and the time needed for each print. These prints are individually signed and numbered by the artist, who may also print a further 10% of the edition for their own use; these are designated "artist's proofs", labelled AP. An artist's proof is not a trial proof. A photo-mechanical or digital print is not an artist's print. No matter how the artwork is created it lacks the individual treatment given by the artist. Such a print may be described as limited edition and may even be restricted in number, but such reproductions often have a print run of 1000 or more, despite a relatively high price. They are much less likely to increase in value, even though sometimes being signed by the artists.

Care of your Artist Print

All artists' prints or original prints are printed on acid-free paper to minimise discolouration, and are mounted and framed with conservation-quality materials. If unframed prints are to be remounted or framed, care should be taken to use conservation techniques and materials. Hand-made or mould-made papers are extremely sensitive to moisture, and need to be allowed some measure of contraction and expansion, but extreme conditions should be avoided; prints should not be hung in direct sunlight or in damp conditions, and on not account should the print itself come into contact with the glass in the frame.

Tinsmiths stocks and shows work by print artists using any or a combination of the following print techniques.

The surface of a metal plate is covered in wax and the artist then creates their image by scratching into the wax. The plate is then immersed in an acid bath. The areas of the plate not covered by the wax are then ‘eaten’ away by the acid creating a grove for the ink to sit in.The plate is then covered with ink most of which is then rubbed off so only in ink in the groves remains. Dampened paper is then placed on an etching press and the plate placed ink side down on top of it. All this is covered with layers of padding and run through the press which looks a bit like a mangle. The image has now been transferred to the paper.

All are relief printing processes in which the image is dug into the wood or vinyl - with the areas not to be printed being cut away. The linoleum or vinyl sheets are usually mounted on a wooden block and the woodcuts often display the grain of the wood (unlike a wood engraving where fine end grain wood is used such as boxwood)in the resulting prints. Successive prints may introduce more colours and the block may be modified between these to create polychrome image. Occasionally the vinyls and linoleums may be treated to give a variety of surface effects.

A planographic form of printing. It differs from other processes where the image is raised (Lino/Woodblock), or recessed (intaglio: copper/wood engraving or etching). Lithography depends on the interaction of two incompatible substances, grease and water, on a prepared flat surface. The means of making marks on the stone/plates are very similar to those used for drawing/painting and consequently artists immediately feel comfortable using them, unlike having to come to terms with handling an etching needle on copper plate for example. Once the artist has completed the drawing, the prints are created on presses where an alternate use of damping and inking ensures that only the artist's drawn image receives the application of ink which, when printed on suitable paper, provides the lithographic print which employ several colours.

Collagraphs are images printed from collage plates, constructed from found materials, textures and also cut marks. The plates are printed in the same way as an etching.

Ink squeezed through a fine silk screen produces areas of textured color. Areas are blocked out with stencils or by a photosensitive film. Artist's often adapt screen and make repeated and layered prints. Screenprinting has its roots in commercial images and the resulting prints frequently have a bold and contemporary feel.

This is an inkjet printer print & is not generally defined as an 'Artist Print'. None of the prints shown on the Tinsmiths website are giclee prints. 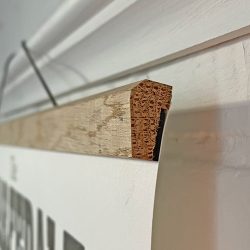 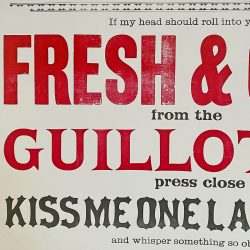 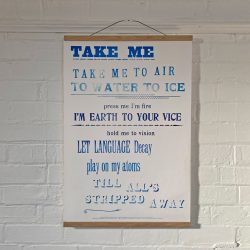 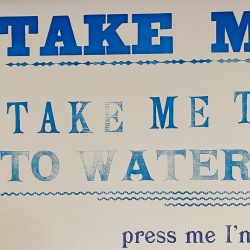 Me and him, Unframed Print by Mark Hearld 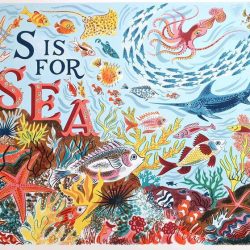 S is for Sea by Emily Sutton 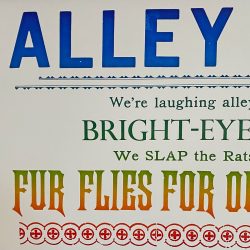 £24.00
We use cookies on our website to give you the most relevant experience by remembering your preferences and repeat visits. By clicking “Accept”, you consent to the use of ALL the cookies.
Cookie settingsACCEPT
Manage consent

This website uses cookies to improve your experience while you navigate through the website. Out of these, the cookies that are categorized as necessary are stored on your browser as they are essential for the working of basic functionalities of the website. We also use third-party cookies that help us analyze and understand how you use this website. These cookies will be stored in your browser only with your consent. You also have the option to opt-out of these cookies. But opting out of some of these cookies may affect your browsing experience.
Necessary Always Enabled

Performance cookies are used to understand and analyze the key performance indexes of the website which helps in delivering a better user experience for the visitors.

Analytical cookies are used to understand how visitors interact with the website. These cookies help provide information on metrics the number of visitors, bounce rate, traffic source, etc.

Advertisement cookies are used to provide visitors with relevant ads and marketing campaigns. These cookies track visitors across websites and collect information to provide customized ads.

Other uncategorized cookies are those that are being analyzed and have not been classified into a category as yet.